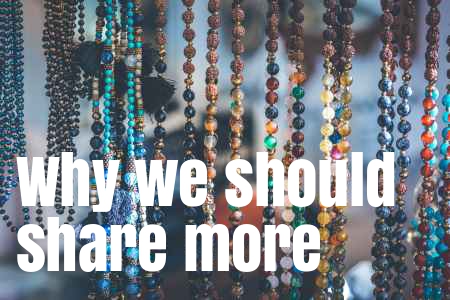 This concept is not my own but I heard it from a man I met on a short term mission trip.   Every year he would wear a small wooden fish on a string around his neck.   When anyone said to him, “Oh, I like your fish.” Or any version of that, he would remove it from his neck and give it to the admirer.   Within a day we began to notice many people at camp with the same fish necklace.   They shared the magic words with many and by the end of the last day of camp, all 400 campers had a fish of their own.   This amazing man made it his mission to teach everyone an important lesson about sharing.   I spoke to him about his fish and he said that he spends all year making enough fish for everyone at camp the next summer.   There are actually so many lessons that could be taught with this one example but I chose to take his example and follow it in my own life.   The first time I did it was with the very fish I got from him.   A friend commented that she liked it and I removed it from my neck and gave it to her.   The emotions that went along with that action were complex.   I felt sadness at first; knowing I made the commitment to give it away but I really loved that fish.  I wanted to keep it as a reminder of the man, the idea and the week.  I felt proud that I had the courage to follow through with my decision.  I felt joy when I saw how confused and pleased she was with my unexpected gift.

Over the last five years that little fish has not been forgotten.   He lives in my memory and the idea has prompted me to give away many items that people have commented that they love (with the exception of my clothes!).   Jewellery I have made, a giant painting I did, a bible cover, and tons of food creations.   This week I gave away a special work of art I had made at one of my most memorable conferences I have ever been to.   The young woman commented how she “loved” my art.   I didn’t even think about it but grabbed it right off the wall and handed it to her.   The shock on her face was so fun to watch.   She tried to refuse it but once I decide to share it’s done.   I convinced her that it was okay and that I wanted to bless her by sharing.   She reluctantly took it and was so thankful and happy with it.   The joy I get from sharing with others increases each time.   It’s different than giving money to a cause or giving a birthday gift.   This is giving someone something for nothing.   It is giving for the sake of giving.  It is giving to make someone happy yet days later, I am the one still smiling.

The blessings I receive in turn are great.   I feel immediate joy but it is a joy that increases and continues when I see how the receiver loves the item.   I also feel so good about the fact that I do not make an idol out of things.   They are just things.   They could be broken tomorrow and we cannot take them with us when we die.

Sometimes it stings a little to know that I am giving away something that may be worth a lot, art that means a lot or that I have worked for hours on and I love it too!   Then I remind myself these are the things we need to be sharing and giving.   Not the stuff we hate and don’t want anymore.   The purpose is to give your best.   To show people they are worthy of our best.  To encourage people to share love with others. To set an example to the world that the things are not so important in this life that we can’t share them.  Jesus gave his whole self for us so we in turn should learn from his example.

Next week, Tuesday November 27 is #GivingTuesday.   The U.S.A marks the Tuesday after Thanksgiving to encourage people to give.   Comment below with ideas of what you can give on or before Giving Tuesday?

Sharing what drives me to be a better woman, wife & mother.

Because we all live a life that is perfectly imperfect

The Art of Blogging
Untamed

we wrote and forged through the life of love and loss...

Motivation and Inspiration for Single Parents.

BY GRACE THROUGH FAITH

What is a Leadership

Leadership is the art of motivating a group of people to act toward achieving a common goal. We work on developing Leadership Skills and Styles to influence others.

Painting the World with Colorful Words and Enticing Rhythm

No filters, no edits, just the real deal about foster parenting.

What if you spent every day looking for One Beautiful Thing?

How to feel better

Another year, a decade or a lifetime - sooth your body eternally

Our lives are the sum of all the choices we make, the bridges we cross, and the ones we burn.